Nik Nok Media founder, Amanda Konkin, is excited to be part of ACTivist Theatre Collective’s Short and Sweet: Small Plays for Big Ideas, happening this year at the Vancouver International Fringe Festival.  Amanda is directing one of the plays, The Apartment, about two women in the early months of the 1992 Bosnian War.  The play explores the dynamic between these two colleagues after Nusreta, a muslim, returns home to find Ankica, a serb, living in her apartment.  Vancouver Playwright Trina Davies was inspired by true stories of the Bosnian conflict, specifically the closure of the Omarska Concentration camp, to write this moving piece of theatre.

For a bit of background on the camp and to hear the thoughts of the real Nusreta, check out one of the articles Davies used for inspiration here: http://www.guardian.co.uk/theguardian/2004/sep/10/guardianweekly.guardianweekly1

In it, the real Nusreta discusses her feelings about returning to the camp years after its closure, and what the ordeal meant to her.

“The Apartment is an engaging script that deals with very complex issues in a straightforward and highly dramatic way.  The dialogue and characters of this piece provide a lot of substance for creative direction and I believe it can really speak to audiences about serious topics though a truthful and inspired voice”

Short and Sweet: Small Plays for Big Ideas will be playing at Vancouver International Fringe Festival fri sat and sun starting sept 9-sept 18th
The program for the fringe festival is now online and can be accessed through their website http://www.vancouverfringe.com/program-guide/ .
The site also has tickets on sale as of August 4th so be sure to purchase one soon so that you don’t miss out on this special collection of plays!

Nik Nok Media is lending a hand to the fabulous team at ACTivist Theatre Collective for their Vancouver International Fringe Festival production this year!  As part of Amnesty International’s 50th Anniversary celebration they are presenting Short and Sweet: Small Plays for Big Ideas at Photohaus Gallery in Vancouver. 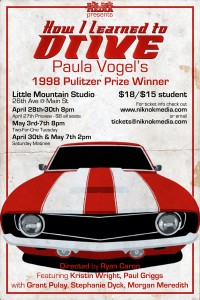 Li’l Bit’s best memories are of being alone in her car doing 90mph down the Maryland back roads with her Uncle, the best, worst, and biggest part of her childhood.  How I Learned To Drive is a Pulitzer Prize winning drama that follows one woman’s journey through alcohol hazes, sexual discovery, confusion, terror and joy, with a man at the centre of it all. This play takes the audience through a complicated and poignant exploration of sexuality, family and childhood, revealing the discerning truth that in life, things are rarely black and white. There are no shining knights or villains, only memory, action and consequence.

How I learned to Drive is playing at Little Mountain Studio on E 26th and Main, April 27th- May 7th, 2011.  For discounted tickets attend the $8 preview performance on April 27th or 2-4-1 night Tuesday May 3rd, or purchase regular tickets for all other performances, $18 General Admission and $15 Student/Senior.  Ticket reservations can be made in advance via email: tickets@niknokmedia.com.

Simulating a movie that was largely inspired by Baudrillard’s treatise Simulacra and Simulation seemed like the perfect way to pay homage to this modern classic! The Matrix is full of powerful images and creative filming techniques that were a lot of fun to explore in this 60 second recreation.

The Matrix Rebooted from Nik Nok Media on Vimeo.